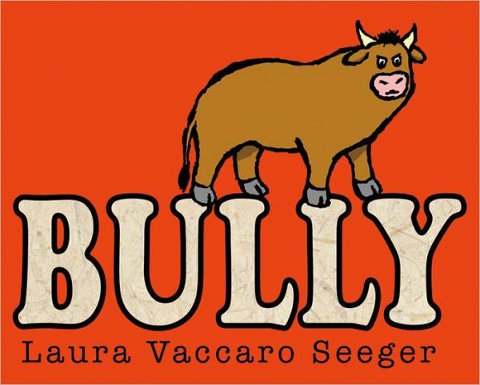 Some of my kids are afraid to attend the public schools because they’ve read so much about bullies.  It doesn’t matter what I say, what their public-schooled siblings say – they have seared into their brains the stories they’ve read or listened to about bullies at school.

I particularly like this book, because it visually illustrates so well what we all know about bullies.  Usually, they’re bullied at home or by someone bigger; bullying others makes them feel important; and once someone stands up to them, they (usually!) back down.

In Bully, a big bull tells a little bull to leave, and the little bull feels sad.  His other barnyard friends ask him to play, and he takes out his sadness on them by calling them names.  As you turn the pages, you see the little bull grow bigger and bigger as he says his mean words.  But after the little goat stands up to him (more than once), he suddenly deflates, realizes his mistake, and humbly asks the rest of the animals to play.

Seeger inserts humor in the pages by having the bull’s mean words fit the animal to which he’s speaking – for example, he calls the turtle “Slow poke!” and the chicken, “Chicken!”

Highly recommended for ages 3 to 10 (and potentially middle-schoolers too, if read with parents and/or younger siblings).