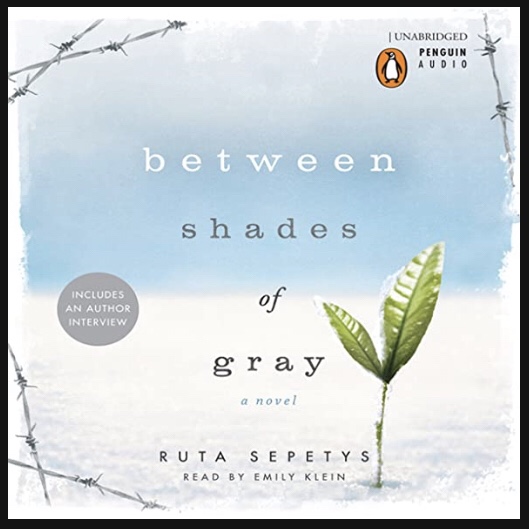 Lina regrets missing the signs. She was not prepared, so Stalin’s men grabbed her from her apartment in her nightgown.

Lina was one of millions of Lithuanians falsely charged with crimes and resettled to Sibera. Between Shades of Gray by Ruta Sepetys tells her story, that of her family and that of those with whom she comes in contact. Strangers become family as they endure horrific conditions, first in train cars, then in a labor camp, and then in Siberia.

I had a hard time putting down this heart-wrenching story from Sepetys, her debut novel. In it, she tells the story of her people and their fight for survival under Stalin’s rule.

Sepetys relates the horror of waiting outside a Lithuanian hospital for a woman to give brith. The woman’s name was on the list. The minute the umbilical cord is cut, soldiers grab her, the baby and throw them in the truck with Lina, her family and the rest of the prisoners. Spoiler alert: Neither one survives; one is brutally killed.

Between Shades of Gray would be a great supplemental novel for those studying World War II or Stalin’s reign of terror. It’s also great for those who want to read meaningful, literary works and not just the latest commercial fiction.

However, I will caution the events of this book are for the emotionally mature. Highly recommended for ages 15 and up.