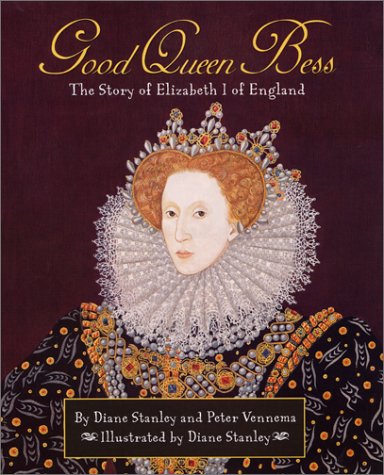 There are few very good history story books for children, and Good Queen Bess is one of them.

This is the story of Queen Elizabeth’s life – from her father (notorious King Henry VIII who divorced or killed so many wives), her birth, her rise to queen and her amazing ability to navigate the political landmines of her time to help England rise to power.

The horrors of what King Henry did are not ignored, but are also not dwelt upon, and so are not upsetting for most children.  The authors talk about Elizabeth’s childhood, her siblings, her imprisonment in the Tower of London, and her reign.

I think difficult topics such as politics, the beheading of Elizabeth’s mother, the eventual beheading of Mary, Queen of Scots, among other things, are explained in a way a child would understand.  The authors take several pages to explain the difficult relationship between the cousins, acknowledging that “at last, on the morning of February 18, 1587, after twenty years in prison, Mary died bravely.”

My children really enjoyed this book.  The author Diane Stanley also illustrated the book with beautiful pictures, some drawn from portraits of the time.  My eight-year-old and I were mesmerized by the beautiful clothes in the illustrations and spent quite a bit of time pouring over the pictures.

Even now, as I sit here with the book beside me, I’m drawn to the pictures of Queen Mary and King Philip, Elizabeth in the Tower of London, her coronation as queen.  I think my favorite is a full-page picture of her in the army camp on the coast at Tilbury, rallying the troops in anticipation of an attack from the Spanish Armada. She’s sitting on her horse, side-saddle of course, with a steel breastplate worn over her beautiful dress, a sword in her right hand raised above her head.  It’s so striking.

What a beautiful, and gentle, way to introduce a child to real history.

Recommended for ages 5 and up.