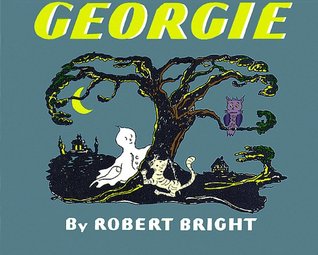 The little ghost Georgie takes great comfort in his evening routine. He makes the stair creak, the parlor door squeak, and the inhabitants of his house know what they need to do next. It’s the same routine every evening.

Until Mr. Whittaker decides to fix the creak in the stair, and oil the parlor door’s hinges.

Poor Georgie is lost without his routine. He wanders around, looking for a new house. He ends up in a barn, until one night…

I don’t normally enjoy books about ghosts, monsters or their ilk. But Georgie by Robert Bright is an exception. Georgie could be any toddler or preschool who enjoys routines, and feels lost when that routine changes. And Georgie, even though he’s a ghost, gets scared too. That can be a great comfort to a child with a vivid imagination.

And the little one who enjoys Georgie will have several books to enjoy, including Georgie and the Robbers, Georgie to the Rescue and many others.

Recommended for ages two through seven.