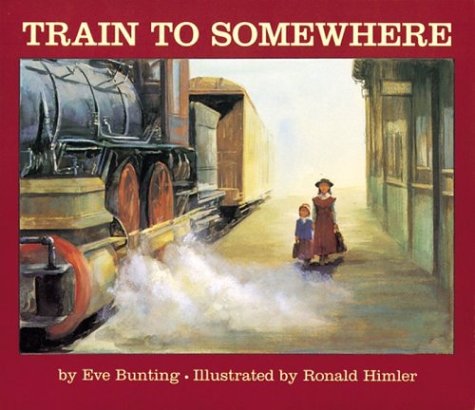 Train to Somewhere by Eve Bunting tells the story of Marianne, a young girl heading West on the Orphan Train.

Her mother left her at the orphanage years earlier, promising to come for her after she had made a home for them out west. She never came back.

Marianne is convinced her mother will meet her at the train, but as the train stops at different towns in Illinois and Iowa, her hopes fade.

Tenderly told, Marianne’s story brought tears to my eyes as I read it. I could feel her hope, and her disappointment at every stop.

Will Marianne find her mother? Will she find a family?

While Marianne’s story is fiction, the Orphan Trains were real. Bunting’s introduction gives a brief background to the Orphan Train, and delineates what is true and fiction in her book.