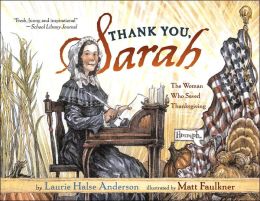 While in one sense this is true, Thanksgiving wasn’t established as a national holiday until much later in history.

Thank You, Sarah by Laurie Halse Anderson explains the history of Thanksgiving as a holiday, focusing specifically on Sarah Hale’s decades-long campaign to create a national holiday for Thanksgiving.

It’s an interesting tale, made even better by lively, detailed and sometimes hilarious illustrations from Matt Faulkner. I especially love the 2-page spread of the horror of Thanksgiving Day being cancelled: a man looks in horror at the TV, which declares “no football today!” as football players, native Americans and Grandma sadly look on, while a turkey struts triumphantly in the foreground.

Anderson includes extensive notes at the end of the book, with loads of interesting facts about Thanksgiving and Sarah Hale.
Recommended for ages 3 – 9.