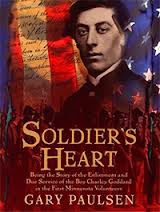 The newspapers today are full of stories of soldiers struggling to re-adapt to civilian life, living with post-traumatic stress disorder (PTSD) among other things.  It made me ask the question – what about the soldiers of the past?  Did veterans of World War I or II suffer from similar issues?  What about those who fought in the Civil War?

Author Gary Paulsen answers the last question in his book Soldier’s Heart.  Paulsen tells the story of Charley Goddard, anxious to serve his state and his country in the war between the states.  He lies about his age, and ends up fighting in some of the worst battles in the Civil War.  As he waits for death, and suffers through the horrors of fighting and watching men die all around him, Charley becomes numb, hardly able to function.  When he does get home, he struggles to readjust to ‘normal’ life.

Paulsen based his book on a real person, changing some details.  By the end of this short, and haunting book, the readers will understand Charley’s “soldier’s heart” – known today as PTSD.

Highly recommended for ages 14 and up.