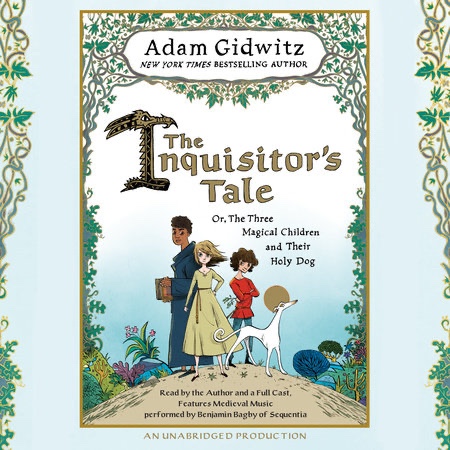 The subtitle is what really made me pick up The Inquisitor’s Tale by Adam Gidwitz – Or, The Three Magical Children and Their Holy Dog.

Gidwitz tells the story of these children through the recounting from many different people, all gathered at an inn in rural France during the Middle Ages. It’s a fascinating tale – a girl who sees visions, a boy who heals a dragon, and a strong young oblate who can shatter a stone bench with his hand. Plus, their dog who apparently came back to life.

I enjoyed the total immersion into medieval life. Gidwitz, married to a medieval scholar, has done his research thoroughly. We see life of the peasants, the oblates in the monasteries and the Jews in the villages and cities. We see the fear and superstition that was a part of every day life. Are these children really miraculous? Are they, and their dog, really saints? Did Jacob really heal a dragon?

In many ways, we can see the blending of faith and mythology during the Middle Ages reflected in this book. Gidwitz subtly, and not-so-subtly, challenges the assumptions of those times (and thus ours) with the friendship of these three children and what they’re able to accomplish. I particularly like the way he handles the pain and sorrow the children experience, and how he answers the age-old question, “Why does God allow bad things to happen?” Gidwitz provides two complimentary answers – one from a drunken friar (really, did he have to be drunk?) and one from a troubadour, who sings the children a song.

One scene deserves a special mention. The children and their protector are at a massive book burning in Paris – King Louis IX is burning Hebrew books and they want to save some of them. Before the king sets fire to the books, he offers the Jews witnessing the burning a reward for converting to the catholic faith that day. On one hand, I appreciate the children’s response to this offer, and on the other, am concerned about the underlying world view it conveys.

“And the idea of converting here, on this bridge, for money? It would be as degrading as being publicly whipped. What was a Jew, that his faith could be bought?” I love the indignation in these lines. Any person of faith, if his/her faith is true, should not be tempted to convert for money.

However these lines, written before the previous section, disturb me:

“Just a few days ago, William and Jeanne would have begged Jacob to follow Christ, and save his soul from damnation. Now the idea of it seemed ludicrous. If God would save their souls, surely, surely, He would save Jacob’s, too. What difference was there between them, except the language in which he prayed?”

So many theological implications in the above lines. I won’t go into them all. Of course, God created all people equal. William and Jeanne are not better than Jacob because of religion or race. But we, as humans, cannot assume God will save every person’s soul, especially since God has said Himself there is only one way to salvation.

That debate aside, I thoroughly enjoyed The Inquisitor’s Tale, its twists and turns and surprise ending.

Highly recommended for ages 8 and up.