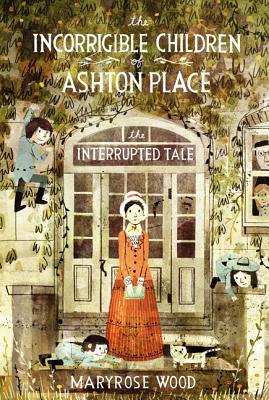 I’m so excited to tell you about the newest books in a couple of my favorite series!

The Interrupted Tale is the latest installment in Maryrose Wood’s series The Incorrigible Children of Ashton Place.  Our favorite governess, Penelope Lumley, takes the children back to her school, the Swanburne Academy for Poor Bright Females.  The headmistress there, the beloved Miss Mortimer, has invited Penelope to speak at the Celebrate Alumnae Knowledge Exposition (or CAKE).

The children are excited for cake and Penelope cannot convince them that CAKE means something very different.  And instead of a lovely, relaxing getaway at her favorite place in the world, Penelope’s mysterious past, and the children’s equally mysterious past, continues to haunt them with unanswered questions… and the mysterious appearance of Judge Quinzy, whom Penelope thinks is her employer’s father, long assumed to be dead.

Fans of the series will find more funny incidents with the children’s love of all things literary, historical and hysterical (“The fall of Rome!” they holler, and then act it out – quite often at inappropriate times), Penelope’s unexpected ingenuity (“Miss Penelope Lumley did not invent the filibuster, which, as you know, has been in use since the days of Ancient Rome.  However, she may fairly be credited with inventing the fernibuster.”  Not sure what a fernibuster is?  You have to read the book!), and hilarious asides from the narrator (“Many years later, a popular word-making game would be invented that assigned point to letters based on how scarce they were: The scarcer the letter, the more points it was worth.  If Miss Lumley’s mind had not already been so thoroughly occupied, she might well have invented such a game herself at this very moment, and thus changed the course of history forevermore.”)

I will admit to being a bit behind on the publishing schedule of another of my favorite series, Sherlock Holmes: The Legend Begins by Andrew Lane.  I just finished reading Black Ice, the third book in his series about the teenage Sherlock Holmes.  I only realized there was a third book because I spotted the fourth book, Fire Storm, on the “New Books” shelf at the library.

Black Ice takes young Sherlock and his older brother Mycroft to Russia, touring with an acting crew.  Mycroft has been framed for murder, and Sherlock is determined to figure out how the murder was carried out, and why the perpetrators targeted his brother.

Full of action, adventure, and a young Sherlock honing his craft and his mind, Lane’s series is great fun to read.  (See my review of the first book here.)

Highly recommended for ages 12 and up.

One thought on “Incorrigible Children of Ashton Place and Sherlock Holmes: The Legend Begins”